It is release day at the The Cat's Pajamas! Three new stamps and four new dies are now available in The Cat's Pajamas shop. We are celebrating the release with a blog hop. If you arrived here from from the very talented Christine's blog you are right on track. If not, then start at the beginning on Michele's blog because you don't want to miss anything. 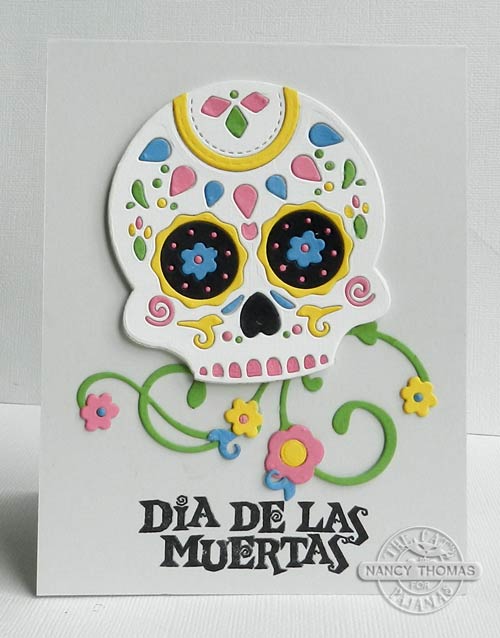 First up is a card featuring the new Sugar Skull CutUps for a day of the dead card.  I cut the main skull from white linen and a Stick It layer, then the individual face pieces from cardstock scraps in black, pink, blue, yellow and green. Having the Stick It layer really made it much easier to assemble. The sentiment from the new Faboolous set was stamped directly onto the soft stone card base. I used the previously released Heart Swirl to cut from green cardstock and then added some leftover flower pieces as well as another flower cut from the previously released Under My Hat CutUps. The sugar skull was then attached with a layer of craft foam. 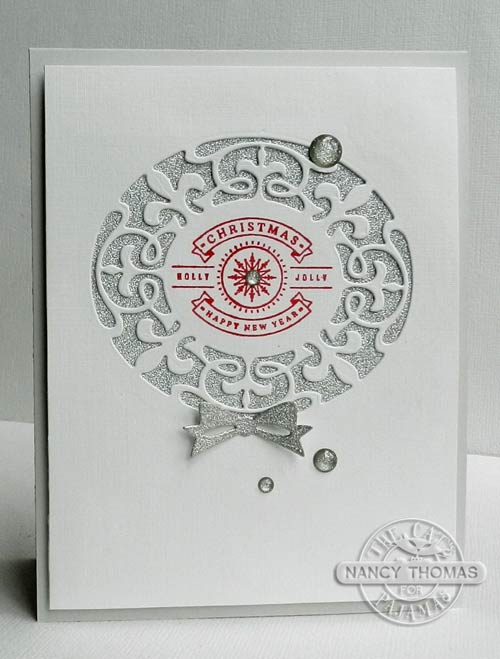 My next card is a clean and simple Christmas card. It is difficult to show how sparkly the silver paper makes this. Plus frankly it was rather dark the day I took this photo. I used a die from the Oval Scroll Duo CutUps to create the cutout from a linen cardstock piece, then backed it with silver metallic cardstock. I stamped the sentiment from the new Christmas Seals in the center using pure poppy ink. I then added a small bow cut from the same metallic paper using a die from the Presents CutUps and a few of enamel dots. The panel was backed with a layer of craft foam and attached to a soft stone card base.


Now hop on over to our newest addition to The Cat Pack Kerry's blog.


Here is the full blog hop lineup in case you get lost along the way:
Michele
Christine
Nancy (You are here)
Kerry
Wendy
Brenda
Deborah
Lynn
Alma@The Cat’s Pajamas