We are celebrating the release with a blog hop. If you arrived here from the extremely talented Julee's blog you are in the right place. If not, then please return to Rebekah's blog because she is the beginning of the hop. 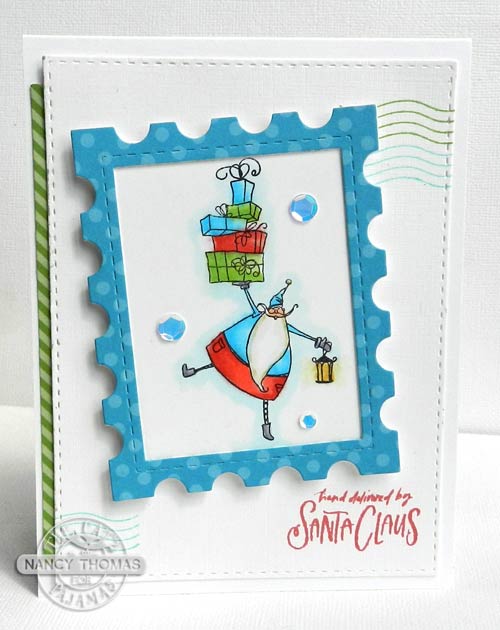 I wanted to do a second postage stamp themed card with another one of the santa images from the Sketchy Santas set. If you missed the first one, it was here. After stamping onto Bristol Smooth cardstock and then colored with Copic markers, the image was framed with the previously released Rectangular Stamp Die cut from patterned paper.  For the card front, I stamped two of the postal images from the previously released J*lly H*liday set using new leaf and hawaiian shores ink plus the sentiment in gala red.  The image piece was attached with a layer of craft foam. A few of the new Clear Holographic sequins around the image added a bit of sparkle. 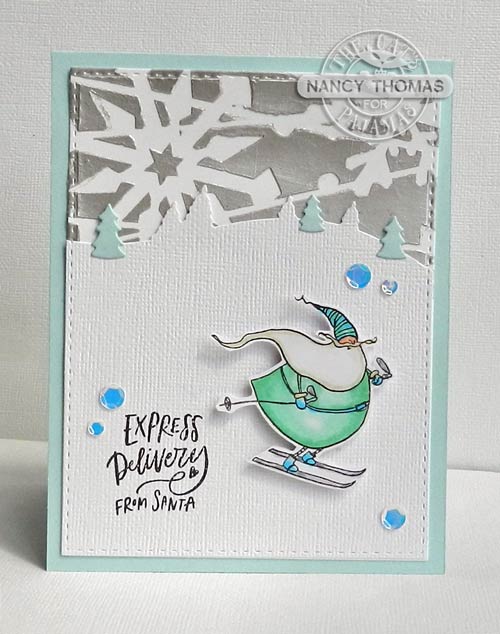 It's obvious that I love the Sketchy Santas set since with this card I managed to use all four santas during this release. And you will see them again at some point! After stamping the santa onto Copics X-Press It cardstock, it was colored with Copic Markers and fussy cut out. The background panel was created by blending pure platinum embellishment mousse over the stitched rectangle with the help of the Blizzard Stencil. I then cut the snowbank from textured cardstock using a die from the Hill and Dale CutUps. Before attaching to the panel, I cut off three of the trees on the landscape and substituted with the trees from the Village Snowglobe Duo Die cut from the same cardstock as the card base. The sentiment was stamped directly onto the snowbank piece and after attaching the santa with foam squares, a few of the Clear Holographic sequins were scattered around.

Now hop on over to The Cat's Pajamas blog for Alma to tell you all about this release!