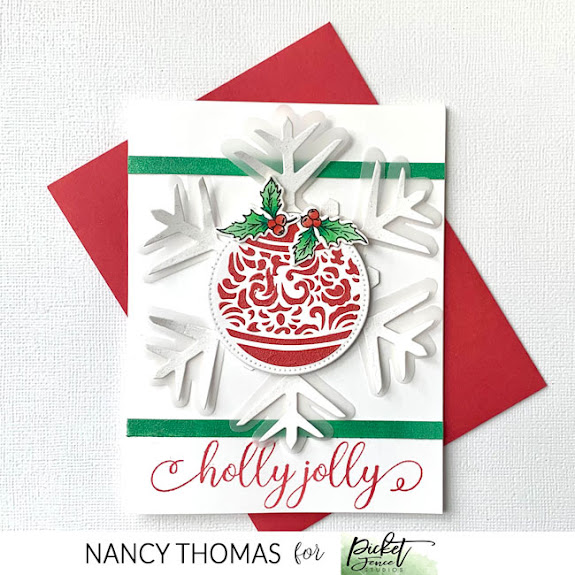 I started out by using the Snowflake Frost Die to cut from vellum for the mat portion and linen cardstock for the actual snowflake. I painted on some Sparkle Paper Glitz for a hint of shine on the snowflake. While the snowflake dried, I blended Rudolph's Nose Velvet Glaze over the Christmas Ornaments 6x6 Stencil using a Mixed Media Spatula onto white cardstock, eliminating the ornament top and bow portion. After the piece dried, I cut it out with a circle die. I stamped the smallest holly and berry leaves from the Seasonal Christmas Flowers twice onto Copic friendly cardstock, cut out with the matching die and colored with Copic markers, attaching to the top of the ornament.I also painted on Mistletoe Velvet Glaze onto the edge of a piece of cardstock, and then cut off two small strips for borders when dried. The sentiment from the Swanky Christmas Sentiments was stamped directly onto the card front using gala red ink. After attaching the matted snowflake, I added the ornament circle using a layer of craft foam and the border strips for contrast. 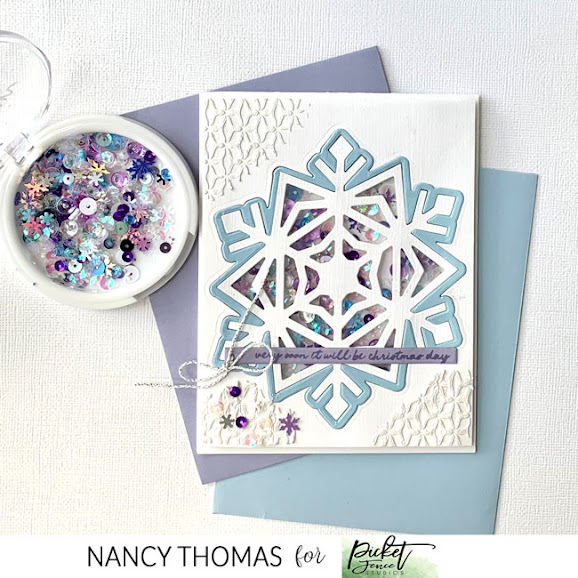 I nested both of the dies from Snowflake Crystal Die set to cut from both white linen and spring rain cardstock so that I cut have a "frame" around the snowflake. This resulted in a card front cutout as well and I assembled all of the pieces together and glued onto an acetate sheet. I added various Foam Tape on the back in order to capture the shaker pieces from the Plum Pudding Sequin Mix. Winter Snowfall Paper Velvet blended over the Winter Rings 6x6 Stencil in three of the corners added some texture. I added a few more of the sequins in the bottom left corner before the paper velvet dried. The sentiment from the There's a Feeling of Christmas was stamped onto a wild wisteria cardstock piece with silver metallic cording added for more sparkle.